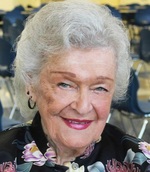 Dorothy (DA) Moore, a birthright Quaker and descendent of Levi Coffin, grew up in Indianapolis and went to Shortridge High School, graduating in 1941.

Dorothy had several jobs before going to business school. She was a skate guard at Riverside Skating Rink, an elevator operator at Blocks Department store, and joined and went off with the Roller Derby but her father went to get her and brought her home.

After graduating business school, Dorothy started to work at the Indianapolis Motor Speedway, working for both Wilbur Shaw and Tony Hulman. In 1962, she was doing volunteer work at the Statehouse and was offered another job; in 1964, Dorothy became the private secretary for Indiana Secretary of State, Edgar D. Whitcomb. They would work together through the years as Whitcomb became Governor (1968 — 1972) and then with him at the World Trade Center until he retired. Dorothy did volunteer work at Westview Hospital and, years later, at the George T. Goodwin Center in Decatur Township. She went from playing Bingo to a full-time secretary. She was honored by Indianapolis Mayor, Greg Ballard, and given the award for Volunteer of the Year.

Dorothy, at age 94, was very active in the community, she belonged to the Decatur Central Lions Club, Decatur Township Civic Council, Decatur Township Neighborhood Association (SWAN), Eastern Star (Mooresville Chapter), the Silver Eagles, and West Newton Friends Meeting. She was a Sagamore of the Wabash.

To send a condolence to the family or share a story about Dorothy, please visit: www.jonesfamilymortuary.com